skip to main | skip to sidebar

Attended a meeting via Twitter yesterday, which was a first for me. Can't say it had quite the same sense of 'being there with others' as meetings I've attended in real or Second Life, but it did at least allow me to be somewhat involved in a meeting that I had no hope of attending in person due to work commitments.

It was also excellent in that it was discussing how librarians and specifically CILIP (1) could make use of web 2.0 tools, and it was doing it by.... making use of web 2.o tools! What a good idea!

The only realistic way I've found of discovering which web 2.0 tools I might have a use for and which I don't is to try them. It's also almost impossibly difficult to convince anyone of their usefulness in the abstract but a demonstration, or better yet opportunity to try them out for real, can be a lot more persuasive. (Hmmm, that probably applies to information skills too!)

Lots of interesting issues were raised but I think the only vaguely useful input I made was to suggest that CILIP might look to the ALA (American Library Association) as a role model. I've since realised - after being reminded by a colleague - that the US SLA (Special Libraries Association) also does a lot of good things.

(1) Note for any non-librarian or non-UK based readers this is the UK librarians professional body.
Posted by Alison at 12:47 pm 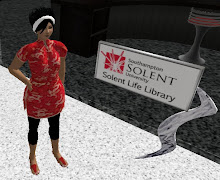